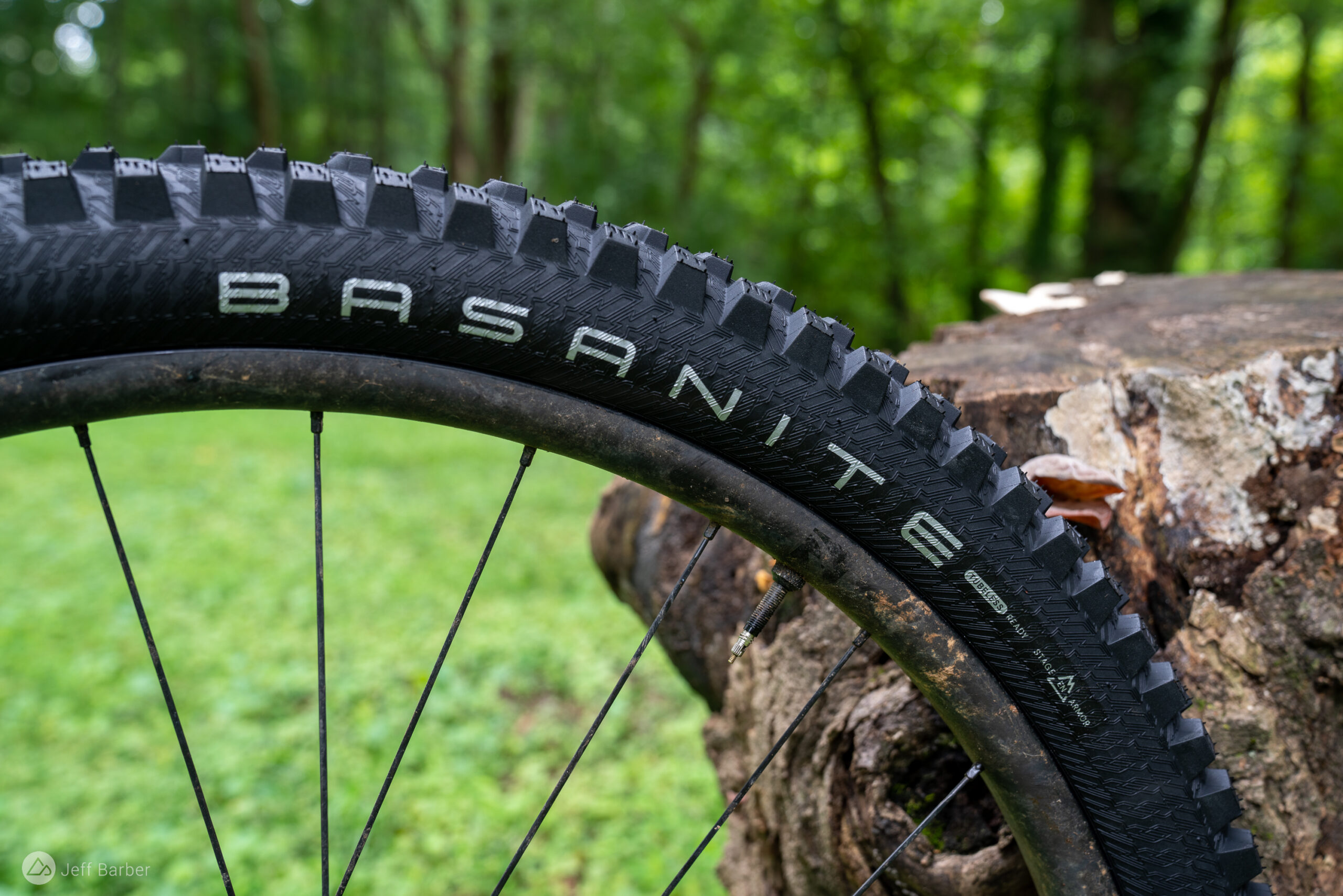 It appears tire manufacturers have lastly obtained the message: Mountain bikers need grippy, tubeless tires that may stand as much as abuse, and we’re keen to pay a little bit of a weight penalty to get it. The brand new American Traditional Basanite tire actually suits the invoice, and it appears the model did their homework earlier than leaping into the more and more crowded MTB tire discipline.

The American Traditional Basanite is out there in 27.5 and 29er diameters, each 2.4″ huge. It’s a directional, rear-specific tire designed for many circumstances, and is obtainable in both a path or enduro model. I’ve been testing the enduro building, dubbed Stage EN Armor, which options two layers of 120tpi casing and three tire compounds “for enhanced damping and sluggish rebound.”

American Traditional says the Basanite is at its finest mounted to rims with a 30mm inside width. I examined mine on barely wider, 32mm rims and located the tire measures 59mm huge, or about 2.32in, which is in need of the marketed 2.5-inch (60mm) width. Presumably a 30mm rim would make the precise width even narrower, although I’ve performed sufficient of those exams now to know that in the true world, most tires find yourself measuring narrower than indicated. Possibly it’s time I get a brand new set of calipers.

Inside, the Basanite tires have a barely raised, honeycomb-like texture whereas the skin of the tire can also be textured. Burly ramped aspect knobs are matched with alternating blocks of tall middle knobs. My pattern weighs 1190g which isn’t light-weight territory by any means.

I didn’t have any issues mounting the Basanite on my Reynolds carbon wheel. It went on and not using a tire lever and aired up with only a flooring pump and a beneficiant quantity of sealant. For my exams I ran between 12-18psi.

I’ve been working the American Traditional Basanite as a rear tire for about two months this summer time in circumstances starting from dry to moist, and from hardpack to unfastened. The tire works notably effectively in unfastened circumstances due to the broadly spaced knobs that dig deep to seek out traction. I discovered it sheds sticky, clay-based soils effectively too.

By way of braking traction the Basanite is nice, barely stuttering or dropping grip on easy surfaces like uncovered rock and rock-hard hardpack. Whereas the compound on the middle tread is probably not as comfortable because the aspect knobs, it was lots sticky in my exams. The triple-compound building appears to be working as supposed with comparatively even put on throughout the tire after a pair hundred miles of using.

The Basanite transitions effectively between the middle and aspect knobs. Within the corners the tire performs okay, feeling a contact squirmy when leaned in both path. Whereas the aspect knobs are lots comfortable and tall for max grip, the sidewall assist appears to be a bit missing regardless of having two layers of 120tpi casing. The excellent news is the double ply casing has confirmed lots sturdy with zero pinch flats or burps regardless of using miles of jank and numerous hucks to flat.

Climbing traction is nice as effectively. The rubber compound grips effectively on dry rocks and roots whereas the tall, angular knobs get the job performed on unfastened and greasy steeps. It looks as if the textured casing in between the knobs even provides a bit extra traction within the moist as soon as the siped knobs bend and slip out of the best way.

The American Traditional Basanite feels draggy when it’s time to pedal, and clearly this isn’t a low rolling resistance tire. The load of the Stage EN Armor building takes additional effort to spin up and the massive knobs are additional buzzy on easy surfaces. The upshot is the tire stays planted always for optimum traction.

Backside line: The American Traditional Basanite is a stable rear tire that almost all path riders will respect due to its sturdy building and effectively thought out tread sample. It’s not a light-weight or quick rolling tire however at $50, it’s priced proper.

Execs and cons of the American Traditional Basanite